Nesma is partnering with SPI China

In this blog I ‘d like to share a few of my recent memories and the story of how Nesma got a new partner in China!

Recently the Nesma office was contacted by a representative of China System and Software Process Improvement Association (SPI China) with the question if Nesma would be willing to give a keynote speech at the annual conference on software estimation. In the same time, SPI China also reached out to the International Software Benchmarking Standards Group (ISBSG) to discuss and renew a partnership that had faded somewhat the last couple of years. Being Nesma board member and ISBSG president, obviously I was curious what this sudden interest out of China was about. After exchanging some e-mails, I understood that Software Cost Estimation is becoming a very important part of the Chinese government plan to improve the Chinese software industry maturity. In 2017, the new 5-year plan will take effect and all preparations are now done in order to build up the right knowledge and to start the right partnerships. So of course, I was absolutely thrilled to visit SPI China and to discuss the possibilities to collaborate with Nesma and ISBSG in order to help the Chinese industry mature.

My first visit to China was in 2008 when the annual ISBSG was organized in Nanjing. Now I went for the second time, in April 2016, this time to Beijing and it turned out that actually some of the same people were involved as back then in Nanjing. When Mr. Richard Wong, Secretary General of SPI China was  introducing the SPI China organization to me in a powerpoint, there were some pictures of important events in the past. And suddenly I saw myself there… in a picture taken with the ISBSG group taken at the workshop in Nanjing. That was a funny surprise! Next to the partnership  discussions, I also gave a training in Nesma functional size measurement and software estimation to a number of SPI China consultants. A few of them already had quite some experience in functional size measurement and I was excited to see that they were all very interested in the Nesma method and the associated guides (especially the guideline for the use of software metrics in contracts) and also the historical data of ISBSG.  This was a short visit, only three days, but it made a deep impression on me. SPI China actually has the possibility to help the Chinese government to improve the estimation maturity in the software industry, and by doing so to improve the success rate of software projects and therefore avoid billions of wasted euros and wasted resources. SPI China can do this, and Nesma and ISBSG can help!

By the way, this is what Nesma already tries to do for years in the Dutch government, but unfortunately the Dutch government does not seem to be in the mode that they want to be helped yet. This is very strange, as according to research by the Dutch IT magazine Computable, the Dutch government wastes 4 to 5 billion Euro per year on ICT projects that fail. Especially the large projects are failing often: of the projects over 7,5 million only 7% is successful. In total, only 30% are successful. Only 36% of all projects are being used after delivery. This is an outrageous waste of time, tax payer’s money and resources. Especially the cancelled projects, where valuable resources were wasted, while they could have worked on something useful instead. And in the end, a solution is probably still needed for the problem the project tried to solve. Many of the problems could definitely have been prevented by estimating the projects in a realistic way, by using mature estimation techniques. The following graph shows the estimation maturity model, developed by Dan Galorath.

As you might know, humans are hardwired to be optimistic. They usually don’t think in probabilities, but think of the most optimal way something can get done. Nobel prize winner Kahneman showed research where even people that were told that they were optimistic when estimating a certain task, actually still proved to be optimistic. Therefore, estimates that are based on human (expert) opinions, experience, views, ideas and beliefs are very likely to be optimistic and need to be mitigated for this bias. Steve McConnell also shows this in his excellent book Software Estimation – demystifying the black art. In the Estimation maturity model, level 0 and level 1 are the stages where the human factor is not mitigated. This means that these estimates are very likely to be optimistic. Starting with an optimistic estimate is a huge red flag for any project, as it will start with a bad planning: a team that is too small and the duration to short. In the end these projects usually are much more expensive: non-linear extra costs as McConnell states in the same book. From Level 2 onwards, the effect of the human factor is mitigated by doing formal sizing as part of the estimate. Understanding the size of the software that needs to be developed greatly helps to estimate the effort needed and the duration needed, using relevant historical data (preferably company data, but ISBSG data is also helpful).

As the estimate is that 95% of the software projects in the industry is estimated using level 0 or level 1 practices, it’s easy to understand that many problems can be avoided just by improving the estimation maturity. SPI China and the Chinese government understand this! Some parts of the Dutch government also understand this, but for instance the relatively new ‘Bureau ICT Toetsing (BIT)’ seems unaware of Nesma or at least seems not willing to start the dialogue with Nesma. Maybe the fact that the Chinese government is taking Nesma seriously will be an eye-opener for them as well.

Anyway, I returned to China for the third time at the end of May, again to Beijing. This time a slightly longer visit so I could enjoy some nice trips to the Great Wall, the Olympic Parc and the Forbidden city. On Friday May 27, the conference was organized and I did not really what to expect. I had prepared my keynote speech with the title ‘Improve estimation maturity using functional size measurement and historical data’, basically covering the topic above. The presentation can be viewed on slideshare.

Then after lunch the conference started. At some point during the conference I was asked to hand over a number of participation certificates to the people that had attended my courses in April. Of course, this was a nice ceremony with appropriate music playing. 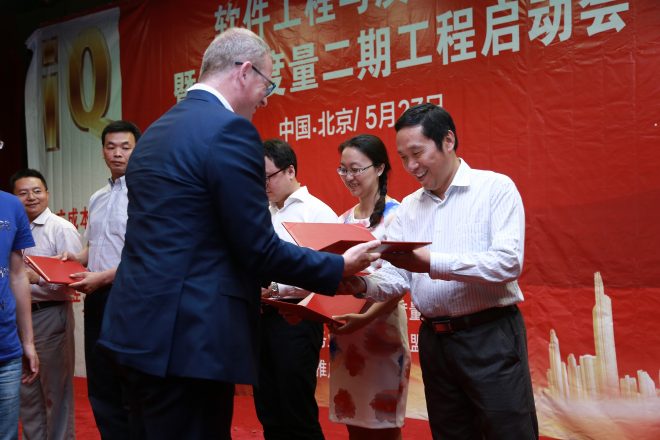 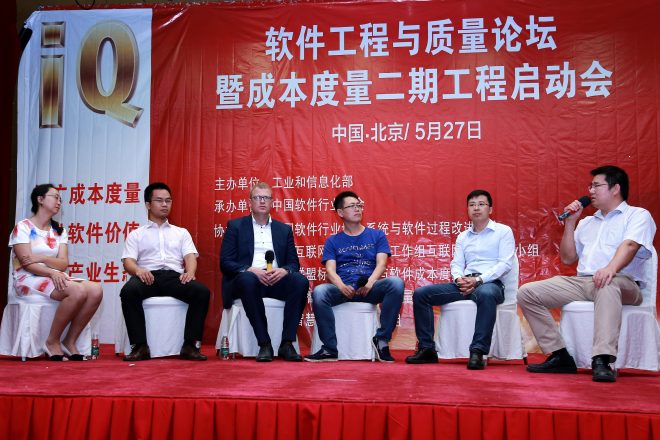 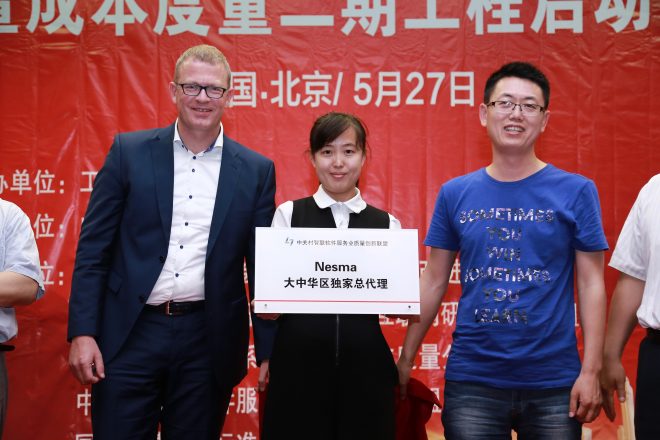 Harold van Heeringen is a senior benchmarking consultant at Metri. Apart for his work for Metri, he is involved in Nesma (board member), the International Software Benchmarking Standards Group (ISBSG, current president) and the Common Software Metrics International Consortium (COSMIC, International Advisory Council, representing the Netherlands).

A blog post represents the personal opinion of the author
and may not necessarily coincide with official Nesma policies.